The Jewel of York Trail

THE JEWEL OF YORK TRAIL IS NOW LIVE

Our eight beautiful beetles will be on tour in York from June 19th until August 13th 2021! They will then return to the Wildlife Park from 14th August until October 2021.

We've hidden 8 fantasically designed and painted giant beetles for you to find around York, to sine a spotlight on our York community and raise awareness for the threatened tansy beetle (Chrysolina graminis). Use the online map to navigate your way around the trail or download our printable map to find them all. 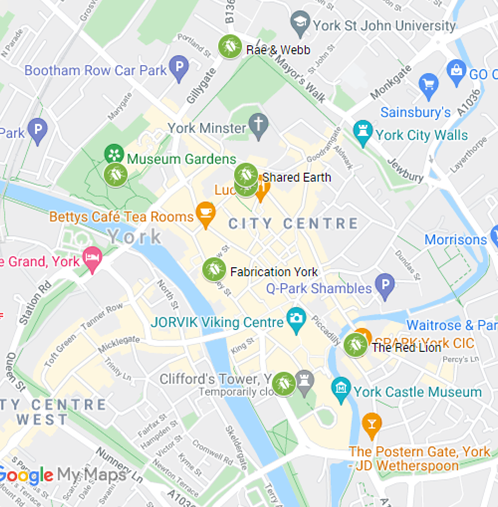 Where are they? You can find them at the following host destinations. Make sure to check out the hosts too!

Fabrication York
Fabrication Crafts Ltd is a Social Enterprise supporting micro-craft and fashion businesses, also teaching crafts skills in house and in the community. They have shops on Albion Street in Leeds and Coney Street in York as well as coworking space in Leeds.

Museum Gardens
The York Museum Gardens are a botanical gardens in the centre of York, England, beside the River Ouse. They cover an area of 10 acres on the former grounds of St Mary's Abbey, and were created in the 1830's by the Yorkshire Philosophical Society along with the Yorkshire Museum which they contain. The gardens are held in trust by the City of York Council and are managed by the York Museums Trust.

Pyramid Gallery
Pyramid Gallery is a privately owned shop/gallery in the heart of medieval York, close to The Minster, specialising in art and Jewellery (all handmade in UK).

The Red Lion
The Red Lion Pub in the centre of York is a friendly pub with a great selection of drinks and a great friendly beer garden.

Shared Earth
Shared Earth sell handmade Fair Trade products and gifts - retail and wholesale. They have a two shops in the UK as well as an online store. With hundreds of amazing animal themed gifts, they're definitely worth popping into!

York Army Museum
The York Army Museum houses over 300 years of history, telling the stories of The Royal Dragoon Guards, The Prince of Wales’s Own Regiment of Yorkshire and The Yorkshire Regiment.

Rae & Webb
Rae & Webb coffee shop serves Origin coffee, Joe's tea and a variety of hot and cold drinks, plus a variety of breakfast, brunches, lunches and a delicious selection of home baked cakes and treats.

The endangered tansy beetle (Chrysolina graminis) is a large and iridescent green leaf beetle, with a coppery sheen. Myth has it that the wing cases of these beautiful beetles were so admired by Victorians, that they were used as sequins. Once widespread in Britain, it is currently endangered, not just in the UK but across its worldwide range. It is now a UK Biodiversity Action Plan (UKBAP) priority species, which means that public bodies have a duty to protect it, together with its habitat.

We would love to see pictures of you taking on the beetle trail! Which one is your favourite? Upload a photo to social media using hashtag #ABCJOY 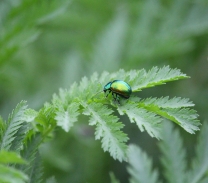